The Land of Hope and Glory Series

Land of Hope and Glory - Book One

It is 1852. The Indian empire of Rajthana has ruled Europe for more than a hundred years. With their vast armies, steam-and-sorcery technology and mastery of the mysterious power of sattva, the Rajthanans appear invincible. But a bloody rebellion has broken out in a remote corner of the empire, in a poor and backward region known as England.

At first Jack Casey, retired soldier, wants nothing to do with the uprising, but then he learns his daughter, Elizabeth, is due to be hanged for helping the rebels. The Rajthanans will spare her, but only if Jack hunts down and captures his best friend and former army comrade, who is now a rebel leader. Jack is torn between saving his daughter and protecting his friend. And he struggles just to stay alive as the rebellion pushes England into all-out war.

“What I enjoy most about reading is that sometimes you stumble upon a book that really draws you in. Time becomes meaningless and you put aside the real world just to finish the story. Land of Hope and Glory by Geoffrey Wilson was one those books for me.”
- Alternate History Weekly Update

“Land of Hope and Glory is an exciting debut ... Geoffrey Wilson has to be lauded for his imagination and storytelling skills.”
- Fantasy Book Critic

“... it is a magnificently rich story as the author spends just as much time on his alternate world as he does on his characters plus his battle scenes are simply marvellous.”
- Fantasy Book Review

“Land of Hope and Glory will dazzle your imagination, and fascinate you with Wilson's spin on a volatile, poignant period of history.”
- Bookworm Blues 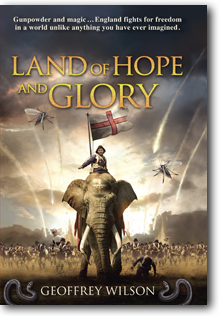 In Land of Hope and Glory, Geoffrey Wilson created a world where the Indian Mutiny takes place in a very different England, while magic is a weapon controlled by her foreign oppressors.

Now, the rebellion of 1852 has failed and brutal General Vadula governs England. Only a few small bands of English rebels still hold out against the Rajthanan empire.

Jack Casey, reluctant hero of the resistance, has survived to live with his daughter in the remote wilds of Shropshire, training young rebels to use the conqueror's magic. But he is gravely ill, with only two months to live ...

Then rebel spies bring news of a rogue Indian sorcerer in Scotland. Mahajan has discovered a mysterious power in the uncharted country to the north - a power that could be the legendary Holy Grail. The Rajthanans have already assembled an army to search for Mahajan. Jack has nothing to lose now. He agrees to lead his own men, disguised as porters for the conquerors, on the same gruelling march.

They hope to find a weapon that will free England from her oppressors. But they discover something that is beyond what any of them ever expected.

“Well written, the characters are clearly defined, and the action sequences are stirring and realistic. The plot is believable and builds to a satisfying ending, which leaves the door open for further adventures.”
- Historical Novel Society

“... showcases some magnificent battle scenes and as it nears its end the tension really builds.”
- Fantasy Book Review 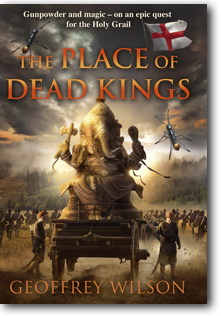 The War of the Grail - Book Three

In Land of Hope and Glory Geoffrey Wilson imagined a world in which an Indian empire rules Europe through the power of magic. In The Place of Dead Kings, Jack Casey - an old soldier who never meant to be a hero - became England's only hope.

Now it is 1856, King John is dead and the war that Jack has dreaded since the start of the English rebellion has finally begun. Regiments of Rajthanan troops are massing to the south of free Shropshire while to the north, refugees bring stories of attacks by the devil himself.

Both friends and enemies fear that unless Jack can find the elusive Holy Grail, there is no hope ...

A strange set of maps that Jack discovered in Scotland could hold the key to England's freedom. Kanvar, the rebels' enigmatic Sikh ally, believes the charts will unlock the secrets of the Rajthanans' magic and perhaps guide Jack to the Grail itself.

But can Jack harness the power of the Grail before the conqueror's overwhelming forces destroy the dream of a free England forever?

“I found The War of the Grail to be a satisfying conclusion to the series ... It was darker in tone than its immediate sequel and had more in common with its progenitor, Land of Hope and Glory, a book I thoroughly enjoyed.”
- Alternate History Weekly Update 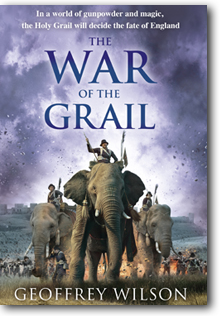